Sadly for us  there will not be the glitzy award ceremony in New York this year due to Covid-19 stopping us all in our tracks, but that isn’t going to stop us celebrating THE GREAT ALIEN CAKE OFF winning BRONZE in the Best Children’s Picture Book Category at the INDEPENDENT PUBLISHER BOOK AWARDS 2020.

What are the Independent Publisher Book Awards?

The Independent Publisher Book Awards (IPPY) started in 1996 as a broad-based, unaffiliated awards program open to all members of the independent publishing industry so basically independent authors and publishers worldwide who produce books intended for an English speaking audience. They run with the intention of bringing increased recognition to the thousands of exemplary independent titles published each year.

The IPPY Awards reward those who exhibit the courage, innovation, and creativity to bring about change in the world of publishing. Independent spirit and expertise comes from publishers of all sizes and budgets and the books are judged with that in mind. Gold, silver and bronze medals are awarded to winners in a number of categories.  Winners are celebrated at a ceremony on the eve of BookExpo – well normally but of course not in 2020. 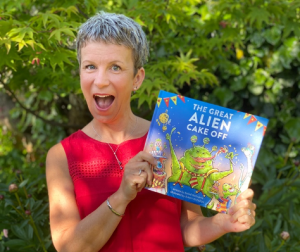 Winning any award is a great privilege, but winning a global award outside your country is particularly pleasing.  We are also delighted for author Rachel McCoubrie who also works as a doctor for the NHS at Southmead Hospital in Bristol.  This is her first book and like many new authors, she was turned down by so many publishers before fate brought her to us.  We really liked the concept and after a few tweaks and the odd title change, the book was brought to life by Robert McPhillips’ wonderful illustrations. So it just goes to show ... never give up!

Winning any award is a great priviledge, but winning a global award outside your country is particularly pleasing.  We are also delighted for Rachel. This is her first book and like many new authors she was turned down by so many publishers before fate brought her to us.  We really liked the concept.

What is The Great Alien Cake Off about . . .

The picture book is a fantastical rhyming story based on the planet Cookie Dreams. Everyone lives exclusively off biscuits, until one day a young alien called Zappo discovers cake.  Soon the other alien parents learn to bake and start to get competitive about their cakes. The headteacher decides to put it to the test and organises a cake off competition at the school. Full of wonderful alien characters who get a little carried away with their new-found love of cake making and accidentally create more than they bargained for . . . what happens next is literally out of this world.

Who is it aimed at?

The book received a medal in the category for Children aged 7 and under, but to be honest it’s a great read no matter how old you are! 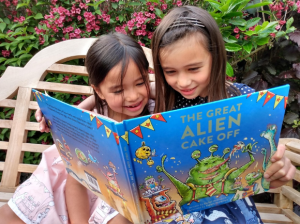