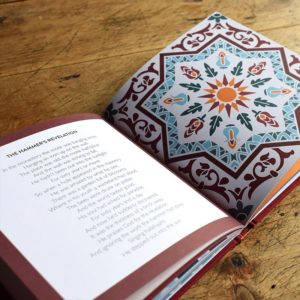 Brian Patten, author of the beautiful The Book Of Upside Down Thinking, joins us once again as a guest on the blog to give us a further insight into his magical new collection of humorous and thought-provoking verse, in this post looking at interpreting the stories.

There is no one interpretation or ‘meaning’ to a Djuha story and there are hundreds of stories. The first ones I read were in an old travel book I picked up in a second-hand comic exchange when I was fourteen, in Liverpool. The latest story was told me a few weeks ago in Hammersmith, London, by Martin, my Turkish barber. His mum told him the story when he was little. Fortunately, Martin put his scissors down while telling it as he was laughing so much. According to the Sufi teachers who used the stories, an accumulation of them will gradually seep into the consciousness and subtly transform the reader or listener’s perception of the world. (I think Martin’s perception of the world is fine as it is, and I seriously hope he doesn’t go wandering off with his scissors to become a guru.)

One of the most famous of all the stories is the one where someone is searching for something they have lost, in a place where they never lost it. Here’s a version of it from the new book. See what you make of it.

He lost a ring down an alleyway.

He saw no point looking for it there.

The night was black, the alley dark,

He wandered off to look elsewhere.

I saw him under a street lamp

Later on that night.

“Why are you looking here?” I asked.

He said, “Because there is more light.”

You might think the verse is simply about the absurdity of looking for what you want in a place you know you never lost it, and that’s fine. But another interpretation might be that by looking for something only in what seems an obvious place, you’re limiting your options of finding it, no matter what it is- a lost key, a ring, love, or enlightenment. Yet another interpretation might be that the “seeker” is looking where it’s easiest to look, rather than in more difficult or obscure places, where what he’s seeking is more likely to be found. Someone else might say that that person will not find what he is looking for no matter where he looks, if he is not ready to find it.